I like taking pictures of people on the street and I spend a lot of time making street shots look as best as they can. If you find your picture in my photo stream, I hope you like it. If you don't, drop me a line and I will consider making the image inaccessible to the general public, although I cannot guarantee it - I just may like the picture too much.

I don't remember when exactly I got my first camera, but I remember the camera very well. It was an old Smena camera my parents found somewhere in the attic, which made me the happiest kid on the block. I no longer have that camera, but here is the version I had, courtesy of SovietCAMS․com: 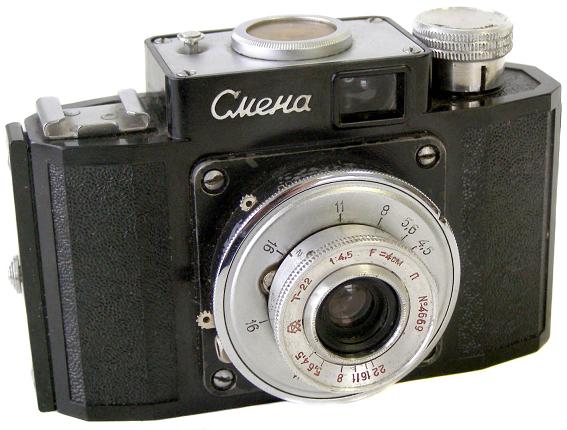 Yes, you guessed it, it was a fully manual camera. Despite what you may think, the little button on top was not the shutter release - pressing that button disengaged the film lock, so it could be rolled back into the cartridge. The shutter button is the one of the two little teethed levers with holes in them. The top one would engage the shutter and the bottom one would release it. Another wheel on the back let me advance the film to the next frame. It was awesome!

My parents loved black and white photography and developed film and printed pictures by themselves, turning the kitchen of our apartment into a dark room and firing up a huge film projector. I was trusted the job of grabbing the exposed photo paper into the developer, keeping it there until the image had the right amount of detail (my Mom kept an eye on me, of course), rinsing it and throwing into the fixing bath.

The best part was when my Mom and Dad printed all of their pictures and let me print anything I wanted with the leftovers of photo paper and chemicals. I loved to print smallest images ever - I thought the level of contrast and detail of a small image was simply fascinating.

In my late teen years my Mom and Dad bought me my first SLR, Zenit EM, which made me the happiest teenager on the block. Here's how it looked like, courtesy of SovietCAMS․com: 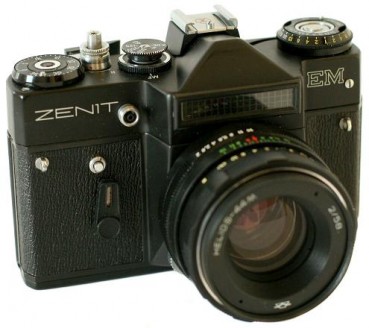 This was an awesome camera. In fact, so much so that I decided to try out color photography. My Mom and Dad tried to experiment with color photography, but abandoned the idea - it was too expensive and somewhat cumbersome to deal with dozens of color pieces of glass and multiple solutions. It simply wasn't as much fun.

This is when I turned to color slides. My parents supported me and bought for me Orwochrom film that I couldn't get my hands on on my own (you'd have to live there and then to get it). Developing slides still required six solutions, all prepared at a very precise temperature, but in the end I had almost magic strips of film with crisp color images and a lot of detail, which I viewed on a huge screen I bought some time later.

The Zenit served me well for many years, but eventually the shutter, which was made of some sort of ruggedized fabric, started to fall apart. I tried to fix it myself, but it was done for. It was the time for me to buy a new camera.

After much research I bought Canon Rebel SII, which was a great camera for a reasonable price. This was also my first camera with an autofocus and automatic exposure metering, but still offering a great deal of manual override. 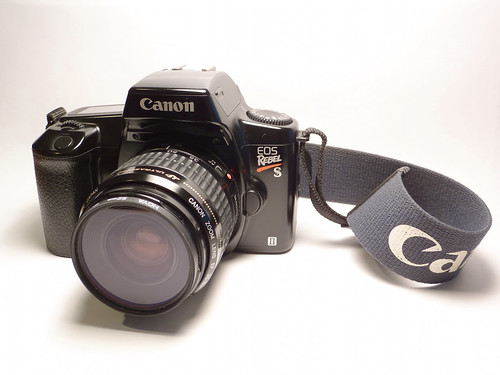 Rebel SII served me very well for over 10 years, but as years went by, I found it more and more difficult to deal with film - sometimes leaving half of the last roll in camera for months. However, I just couldn't switch to digital, which offered extremely poor quality at the time. So, I paused for a few years.

Eventually, I bought a 5MP Nikon E5900, just to capture family moments and later a 10MP Panasonic DMC ZS1, which I simply carry in my pocket every day. This camera has been great and I managed to take thousands of shots with it last summer. 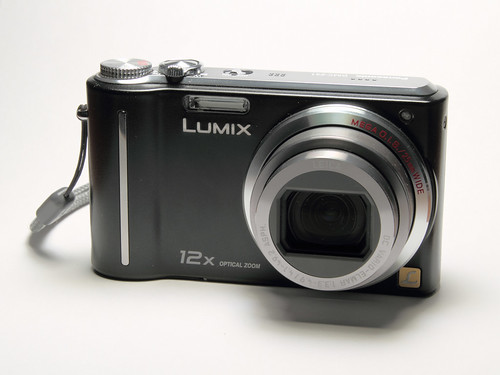 In October of 2009 I bought a Canon EOS 7D and a Sigma 18-250 zoom lens, which allows me to walk around without having to switch lenses. I have been carrying the 7D with me almost every day. 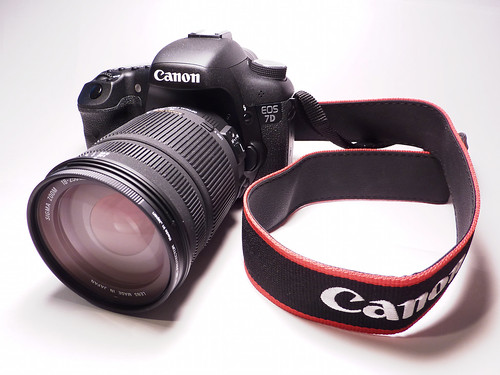 In 2010 I felt nostalgic about film and bought an EF 28-105 for my EOS SII and now I'm inseparable with these three cameras - one in my pocket, one in my hand and one on the left shoulder. You never know when an opportunity to capture something presents and when it does, I want to be ready.

What an interesting life story in photography, you had. And great support from keen parents. A little envious. Mine were into work, horses and only a few photos. Not much record of my life then until I got a Box Brownie.. I do have diaries too though.