Welcome to National Galleries of Scotland on Flickr Commons. 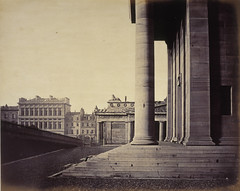 We are delighted to be part of The Commons project, and proud to stand alongside the other great institutions represented here.

We hope you enjoy the photographs in the collection, which will gradually increase in number over the coming weeks.

National Galleries of Scotland looks after one of the world's finest collections of Western art ranging from the Middle Ages to the present day. These holdings include the National Collection of Scottish art which we are proud to display in an international context.

National Galleries of Scotland is also home to the Scottish National Photography Collection. Established to collect and research photography, with a particular interest in Scottish work and a remit to collect and exhibit international photography, the collection has grown to around 30,000 works ranging from the 1840s to the present day. It includes a key collection of photographs by David Octavius Hill and Robert Adamson, some of which is now included in The Commons.

Scotland’s privileged position in the history of modernity lends it a rich photographic tradition. From the beginnings of the medium small groups of scientists and gentlemen amateurs explored its technical and artistic potential.

One such group formed around the optical scientist, Sir David Brewster, at St. Andrews, and professional studios – including the partnership of Robert Adamson and David Octavius Hill – were established in Edinburgh from 1843. From the mid 1850s, technological change helped drive a dramatic expansion of photography, with large commercial operations established by the Valentine family in Dundee and George Washington Wilson in Aberdeen.

Many photographers exploited the romantic potential of the Scottish landscape – photography is deeply entwined in the tourist imagination. By the 1880s Scots photographers were to be found in every quarter of the globe.

Enjoy the photographs, and come back soon.

Most faved
View all

Have something nice to say about National Galleries of Scotland Commons? Write a testimonial